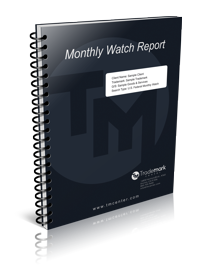 Approximately 25,000 new federal applications are published in the "Official Gazette" each month.

Additionally, if there is someone out there using a mark similar to yours, and you do not take steps to stop its use in commerce, your mark becomes weaker in the eyes of the USPTO. The longer you allow another trademark to coexist with yours, whether you have made a specific decision to do so, or not, the weaker your mark becomes over time. And if you allow one mark to coexist, your ability to fight a second infringing mark is reduced, by mere existence and (tacit) acceptance of the first.

Our watching service reviews the new trademark filings each month to insure that no pending marks infringe on your mark. Our search includes close matches, phonetic matches, translations, transliterations, and anagrams covering new applications each month against your mark, in all class codes. A summary report is sent to you every month via e-mail.

U.S - Monitors newly filed and published applications at the U.S. Trademark Office and monitors new filings in each of the 50 states.

Free Consultation
Call us at 800-705-9600 for a free consultation from our knowledgeable staff.
Request Consultation
Trademark Services

We Meet Your Standards